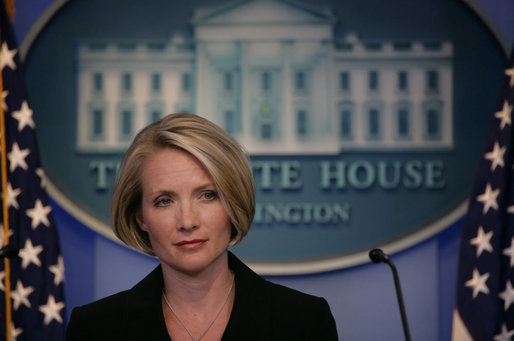 Dana Perino, former Press Secretary to President George W. Bush is a lovely, bright and articulate woman and she really really loves her dog Jasper.  But it is time to stop the pretense that she is a conservative.  She isn’t; she is an elite insider whose contempt for President Trump and the Deplorables who support him and his policies is ostentatiously transparent.

Perino, one of the regular panelists on FOX News’ The Five and the host of her own weekday show on the network, is out of central casting as an establishment Republican and she definitely seems more at home at the Bush Family enclave in Kennebunport, than she does on the front lines of the conservative revolution.

It’s annoying enough to have to listen to Perino’s fellow panelist and Democrat spin doctor Juan Williams perpetually whine that he is the only liberal on the show and then turn to Ms. Dana to validate everything he spews… and most of the time, she delivers; but her pretense that she is a conservative voice has developed a stench that should no longer be ignored.

In the early primary days of Donald Trump’s presidential campaign, Perino’s loathing of candidate Trump was comparable to her then fellow Fox Trump despiser Megyn Kelly, who has since parlayed that contempt into a spot on one of the fake news networks.

Perino, who tries hard to mask her well honed snobbery, simply couldn’t keep up the facade when the corrupt partisan FBI agent Peter Strzok testified before Congress.  When Texas Congressman Louie Gohmert justifiably challenged Strzok’s dubious credibility due to a lengthy affair with another married FBI agent, the Democrats exploded and the horrified Perino called it a “public lynching.”

It’s pretty obvious why the Democrats imploded.  Strzok is one of them and if anyone scored points exposing the haughty dishonest agent, who arrogantly presents himself as emblematic of the very best of the FBI, and  his shifty ethics, the Democrats spontaneously go ballastic.

But why did Dana Perino only join them in their over the top outrage?  She even upped the ante, usurped a version of a phrase used by Justice Clarence Thomas in his confirmation hearings when the Democrats pulled out all the stops to defame and destroy him, and condemned the Texas Republican who asked a legitimate question about Strzok’s credibility.

Why was Perino so offended by the question?  Is it not germane that a witness who was claiming to be an unbiased FBI agent of impeccable character and fair-mindedness is having an extramarital affair with another married FBI agent?   Is this considered appropriate or permitted behavior for even new FBI employees, let alone an agent who has reached the upper echelons of the nation’s most powerful law enforcement agency and is involved in not one, but two of the most important investigations in FBI history?

As Ross Perot once said, “If a man’s wife can’t trust him, how can I?”

It’s pretty obvious why the Democrats went “postal” over Rep. Gohmert’s line of questioning… it hit a bullseye.  But why did the straight laced so-called conservative Dana Perino become unhinged?  Ask Juan Williams…they usually agree on almost everything.