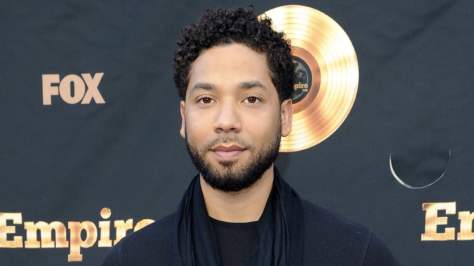 If, and I stress the word “if” (I don’t want to reach conclusions without all the facts like the left does regularly), Jussie Smollett invented this entire caper, hired friends to pull it off and the played the faux “victim” of President Trump and his hateful supporters; much more needs to happen to him than having his scenes cut or reduced on “Empire”.

Smollett, based on his own words and his hateful tweets on our President, despises Donald Trump and anyone who supports him.  The “accusation” that is currently out there is that he hired two brothers (one was a fellow actor he met on the set) to initially send a hate laden letter to him with the return address of MAKE AMERICA GREAT AGAIN.  It was written with words cut out of a magazine and was filled with hate for gays and African Americans.  The magazine, with missing words cut out, is reported to have been discovered in the “hired” brothers’ residence.

According to current speculation, Jussie was disappointed when he shared the despicable correspondence obviously from one of those racist/homophobic ‘Deplorables’ and it didn’t generate much media coverage.  So the theory is that he doubled down, faked an assault complete with a noose, and made banner headlines.  Mission accomplished.

Was the mission solely to garner more publicity for the talented performer?  Perhaps.  But, once again (if proven), if it was an orchestrated hate crime against the President and his supporters, the book needs to be thrown at Mr. Smollett.

One by one, these faux hate crimes are lapped up by the Trump loathing media and the Democrats and spread as absolute truth without any due diligence to find out if the stories are any semblance of veracity.  It it makes Trump and his supporters look terrible, they run with it.  When the stories are exposed as fake, they try to distance themselves from the “bodyguard of lies” they so eagerly embraced days, even hours, before.  Some apologize, but most continue to use the lies as indicative of the hate spread by Trump.

Who is spreading the hate?  Who is keeping racism alive?  Fake news is not harmless; it’s victims are permanently scared.  Remember the “racist” police officer in Ferguson who was accused of killing an innocent little boy who was on his knees begging for mercy saying “Hands up, don’t shoot”?  Eventually, the truth was learned and even Eric Holder confirmed that none of what was originally reported was remotely true; but the police officer was forced out of his job.  No one seems to have heard from him since; he has vanished (maybe into a witness protection program) from the public eye completely.  He had to leave his home and his profession; when all he did was stop a violent massive thug from killing him.

So if Jussie Smollett did orchestrate this entire situation, he needs to be prosecuted to the full extent of the law.  If he gets a slap on the wrist or we get to hear: “he has suffered enough because his career has been destroyed”, that is simply not acceptable.  If he gets to claim as a black gay man, all the persecution he has received justifies what he did; the “deja vu” fake news accounts will never stop.

Years ago, known scam artist Al Sharpton bought forth hideous charges about a young black woman being gang raped and left in a dumpster covered with feces by a group of white men.  Sharpton’s account horrified all who heard it and elevated him into the status of national civil rights leader.  Except Tawana Brawley’s story was not true.  It was a complete fabrication.  But the lie worked; and Sharpton has profiteered from it for decades.

Today, Al Sharpton issued a statement that if Mr. Smollett perpetuated a scam, he must be appropriately punished.  Ironic… coming from Al Sharpton?  No, sick and disturbing; but at least for once Al Sharpton is speaking the truth.