If Deceptive Advertising was a Criminal Offense, Opponents of Oregon Ballot Measures Should be Given the Maximum Penalty 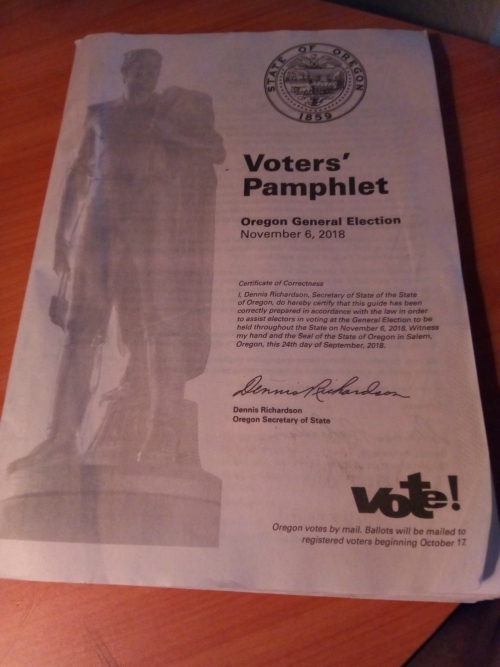 Oct. 16 was the last day for Oregonians to register to vote for the all important midterm election.  Ballots will soon be mailed throughout the state.

Are you one of those who knows that “Korrupt” Governor Kate Brown is clearly the wrong choice for Oregon’s future; but after hearing months of misleading and defamatory things about her Republican opponent Dr. Knute Buehler, you’re not sure you can vote for either of these “scoundrels”?

No question about it, Kate Brown has waged her traditional “take no prisoners” vicious and deceptive assault on her opponent; but at least the Republican nominee has the resources to fight back and rebut the slander and fake accusations Brown is spewing in her multimillion dollar attack ads.  That isn’t the case for the proponents of Ballot Measures 103, 104, and 105.

Vested special interests are spending big bucks to get you to VOTE “No” on Measures 103, 104 and 105.  The all powerful “swamp” is trying to keep their permission slip to tax and spend while maintaining Oregon as a safe haven for the dangerous while feigning compassion and efficiency.  Yet, if you only read their twisted marketing material or see their television propaganda urging you to vote “no” on these populist solutions to serious problems, you are likely completely clueless about what these measures, if passed, would accomplish.

Measure 103:  Opponents claim that a NO VOTE on this  measure will protect your food from being taxed in Oregon.  The exact opposite is true.  Measure 103 puts a protection against taxing or putting fees on grocery food “transactions.”  In other words, because “taxing” food is considered politically taboo, the tax and spend gang wants to tax or put a fee on everything affiliated with getting your food to market.  For example, the “Swamp” want to tax the truck that delivers it to the grocer or any “transaction” remotely affiliated with bringing your food to you.  Are you one of those who likes to order you food on line or have it delivered…without Measure 103, there will be nothing to stop them from taxing or adding a “fee” (another code word for taxes) for this service.  If you don’t want your food taxed and want to close the loophole the Swamp wants to tap into to raise more revenue on any transaction related to groceries, VOTE YES on Measure 103.

Measure 104: The tax and spend gang long ago figured that it didn’t serve their purpose politically to have every tax increase identified as a tax increase….tapped out voters don’t respond well to approving additional and higher taxes so coveted by the Swamp.  So the Swamp came up with a wrath of less alarming euphorisms for “tax increases.”  Words like fees, tolls, assessments, tariffs, related expenses, fair share, dues, etc. to use instead of the red flag “tax increase.”

Opponents of Measure 104 will tell you that Oregon’s constitution already requires a three-fifths legislative majority to raise taxes; and that expanding that requirement to enact “fees” or “tolls” or efforts designed to make the greedy rich pay their “fair share” would be needlessly burdensome and would jeopardize vital services.  In other words, they want to be able to circumvent the Oregon constitutional requirement that tax increases must be approved by three-fifths of the legislature, by renaming tax hikes something else.  Measure 104 would end the “call the increase anything but a tax” and we can circumvent the three-fifths rule.  VOTE YES on MEASURE 104 if you want to close the loophole Oregon politicians have been using to raise taxes WITHOUT a three-fifths majority.

Measure 105.  If you have only been exposed to the hysterical campaign to define Measure 105 as a gateway to turning Oregon into a refuge for Nazis and White Supremacists at the expense of innocent minorities,  you may not be aware that this Measure would simply end the Sanctuary State status of Oregon.

For decades, Oregon has laid out the welcome mat for those who have come to America illegally; giving priority, at major taxpayer expense, over immigrants who follow the law to become part of the American dream.

There is an old adage that some Americans who turn their backs on this lawless invasion do it for the cheap labor and others do it for the cheap votes.  But sanctuary cities and states have become not just havens for those who come here for jobs and the free benefits; sanctuary states often put the safety of their communities in jeopardy by harboring rapists, violent gang members, murderers, and a criminal class that routinely undermines our security and our laws.

Compounding the problem, sanctuary jurisdictions make a practice of not cooperating with or even undermining the efforts of Federal immigration agents in doing their jobs.  If you want Oregon to stop providing a safe haven for the lawless at the expense of the law abiding; if you are tired of being told that there doesn’t ever seem to be enough resources to pay for good schools, public safety, and other vital public services, but there always seems to be enough to underwrite the largess of sanctuary cities and states with the money of American taxpayers; if you want to make America safer and close down our borders to drug lords, gangs that corrupt our children and decapitate our neighbors, and others who mock our laws and rob us of our freedom, VOTE YES on Measure 105.

Don’t buy the million dollar lies and misrepresentations that have taken over your mailboxes and airwaves…VOTE YES on Measures 103, 104, and 105.

Jayne is joined by Skip "Man of People" 7:20: Producer Picks 7:30: Kevin Hoar, Spokesperson for the
View on Facebook
·Share

Jayne is joined by Aaron Stevens for a show on a miriad of topics.. from VA Governor to Olympics!
View on Facebook
·Share