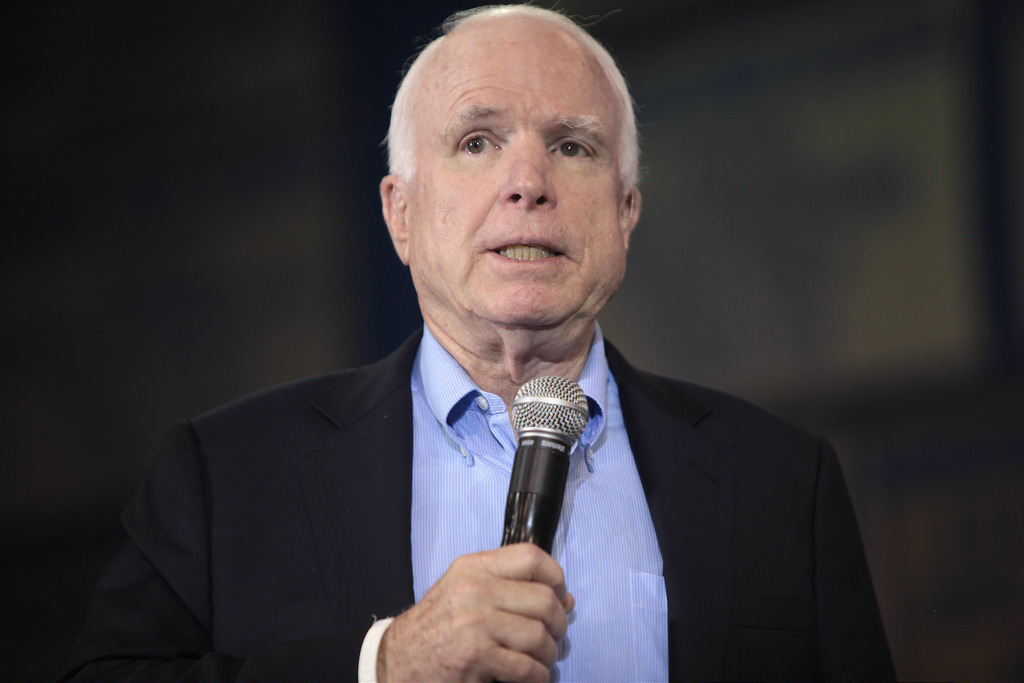 Arizona Senator John McCain, reported to be in the late stages of brain cancer, has let it be known that he wants Barack Obama, not Donald Trump to attend his funeral.

McCain’s latest and perhaps last attempt to do maximum political damage to President Trump will guarantee the return to “hero” status by the mainstream propagandists/Democrats for the ailing Senator.

McCain, has a new ghost written book, in which he also claims to regret adding Sarah Palin to his failed presidential ticket in 2008.

Obviously, Senator McCain has a right to express who he wants or doesn’t want at his funeral; and turning on Sarah Palin, something he admirably did not do even when his presidential campaign team and the media viciously sabotaged the former Arkansas governor, could be the honest reflections of a man looking back on his career.

But make no mistake about it, this trashing of President Trump and his former running mate will once again transform John McCain into a media darling.

ABC’s Jake Tapper, who like most of the mainstream propagandists had little positive to say about Senator McCain when he had the audacity to run against media darling Barack Obama, has defined “American Hero” John McCain’s deathbed demands and reflections a “real moment for the country.”

When McCain was running against George W. Bush in the 2000 presidential primaries or was tag teaming with Ted Kennedy on left wing legislation, the “maverick” Arizona senator  became an icon of the Democrats and their media sycophants.  When McCain attacked everything “W” did or said as president, he became the “go-to guy” for the Bush loathing press.  When he went against his re-election promises and supported amnesty for illegals and campaign finance reform that would have tied the hands of conservatives and given Democrats free reign, he became the “conscience of the senate.”

Senator McCain mistook this media “love affair” with him as genuine admiration and affection; he later learned how disposable he was when he was the Republican presidential nominee vs. Barack Obama.  Suddenly, the “Vietnam War hero” morphed into a corrupt politician  (one of the Savings and Loan scandal “Keating Five) with a notoriously  short fuse and a temperament unsuitable for the presidency.  According to the mainstream propagandists, his absurd choice of Palin as his running mate was emblematic of McCain’s increased dementia and compulsive grandstanding.

It wasn’t until Senator McCain undermined his party, his campaign pledges to the people of Arizona, and his president by being the deciding vote to preserve Obamacare that the media rediscovered their long abandoned affinity for McCain.

Suddenly, the media is mourning over Senator McCain’s health concerns and lauding him as the last “honest” Republican in the Senate.  As the consummate hater of Donald Trump, Senator McCain is back on the faux pedestal the media/Democrats built for him when he was serving their political purposes so masterfully.

Senator McCain seems to need the validation of the press and his co-horts on the other side of the aisle.  He’s getting all of the above and feeding his pathological need for revenge against Trump by dancing to their orchestra…turning on Sarah Palin is just extra “insurance” that he will get the “hero” treatment from the media he so desperately covets.

Oddly, President Obama seems like the fitting hand-picked invitee over President Trump to McCain’s funeral.  Politically, it was clearly the choice McCain made long ago.

May McCain’s vindictiveness give him the comfort he needs during this painful passage.  And while his last gestures may make the media rekindle their contrived admiration for the Senator; it won’t do much for the conservatives who regret voting for him for president in 2008.  Sad.